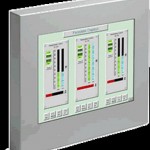 Touch screen monitors have virtually kicked their conventional CRT and LCD cousins to the curb.  You may love your touch screen, or you may hate it, but there it is…staring you in the face and begging for a little understanding.  Touch screen repair and maintenance are not as intimidating as you may think.

First off, there are three basic types of touch screens:

Resistive – Has a multi-layer screen that detects electrical changes from your touch.

Capacitive – Touch transfers some of the electrical charge, so the charge on the capacitive layer decreases sending a signal.  Capacitive screens have a clearer picture than resistive due to a large transmission of light from the monitor.

Surface acoustic wave -two transducers (one receiving and one sending) are placed along the x and y axes of the monitor’s glass plate.  Glass reflectorssend a signal  from one transducer to the other.  No metallic layers on the screen allows for 100-percent light throughput and perfect image clarity. Yup,  they’re the best.

As for physical damage, this is sometimes the death knell of a touch screen.  Fits of anger and frustration directed at your touch screen are not a good idea.  However, sometimes, even damaged touch screens are indeed repairable and it is a good idea to get an expert opinion from an industrial electronic repair firm.

Practice preventive maintenance to keep your touch screen functional for as long as possible.  You should get several years of good use before you need touch screen repair services.